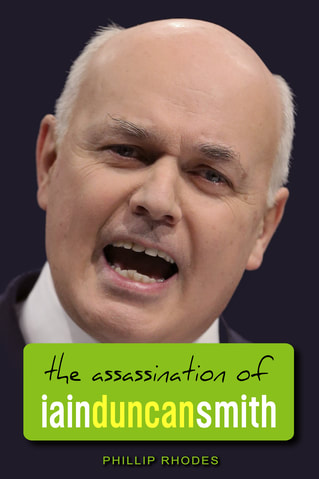 The Assassination of Iain Duncan Smith

"The Assassination of Iain Duncan Smith" is a trashy work of pulp fiction, yet is engaging and was written as an act of peaceful protest against the actions of a deranged, elected politician.

Iain Duncan Smith MP has not experienced true hardship (and probably never will), yet he has wrecked the lives of hundreds of thousands of brave individuals, wrongly labelled workshy, scroungers and spongers.

Don't pity anyone whose misguided actions have contributed towards untold deaths, including numerous suicides, and real emotional and physical hardship.

Don't pity a man who will never experience going without food, heat or light. And never tarnish the sick or the unemployed with any brush, let alone one larger than that used to berate those who fiddle their expenses or avoid paying their taxes. Also, never think the affluent are morally superior to those who struggle to survive on meagre rations.

Polly Toynbee, writer for The Guardian newspaper once wrote: "The trouble with advocacy for the plight of the hard done-by is that we must always find 'perfect' cases, people utterly blameless in every aspect of their life, judged by criteria none of us apply to ourselves, our family or friends. Mistakes, errors of judgement, bad habits, all too human in everyone else are unforgivable in anyone receiving benefits from the taxpayer: weed out smokers or drinkers or anyone too stupid, too lazy, too fat, too angry, too lacking in get-up-and-go or just too depressed to put on a good show." And it's true. Those who work and pay their taxes feel they can ridicule and berate the sick and the unemployed, because they have been brainwashed into thinking that the poor are idle, worthless and bottom of the pile!

Joke, which may or may not be attributed to someone working for the Department for Work and Pensions (DWP): Iain Duncan Smith walks into the meeting room and turns to his trusted staff at the DWP. "I want you to organise the sanctioning of 10,000 more scroungers and one kitten." Everyone looks around the table, and after a prolonged silence, one of his minions pipes up. "Mein Führer, why do you want to sanction a kitten?" IDS smiles and turns to the rest of the table. "You see, no one cares about the unemployed!"

Iain Duncan Smith and his chums might take offence with this book. Yet these same individuals sought to promote freedom of speech when defending cartoons of the Prophet Mohammed. Indeed, Iain Duncan Smith said recently: "The freedom of the press is fundamentally important to protect all kinds of [social] freedoms and no government or authority shall be allowed to take away these freedoms under any excuse or pretext. Without hesitation, I believe in the freedom of the press, and anyone who threatens the free press is the enemy of [all] human freedoms.”

It goes without saying, the author does not encourage, endorse or support acts of violence towards any person featured in this book, nor those employed by the Department for Work and Pensions. The vast, vast majority of benefit advisors are against the current sanctions regime, but are forced to act in a inhumane manner or face disciplinary action.

Certain aspects of Iain Duncan Smith's daily routine and constituency layout have been changed to prevent copycat behaviour. In addition, the author has decided against detailing the plight of individuals affected by benefit sanctions, the bedroom tax, and/or ATOS medical assessments. It would be inappropriate and immoral to directly benefit from the suffering of others.