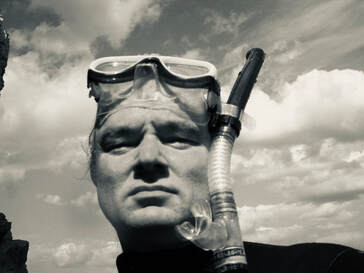 ​
​About twenty years ago I wrote a series of essays on being a wannabe scuba diver. The first highlighted my first open water snorkelling adventure in 1992. It was a work of poetic wittiness, which thankfully never saw the light of day. The original file was accidentally erased from history. The second essay, also lost, recounted my first experience at scuba diving. This was an extremely bizarre adventure that lasted only a few minutes, but I was hooked...

It happened a few days after Christmas, spend with my mum in Loughborough, but what year? Hmm... Definitely before 1998. A quick look through the yellow pages, and one telephone call later, and my first try-dive was booked. The venue was a private swimming pool near Nottingham, used by a now defunct dive shop and PADI school. The biggest hurdle was my size. The diving kit fitted perfectly, but I brought along the wrong swimming trunks. They were definitely too big or the elastic had gone, and I spent most of the time trying retain my dignity. They did offer me the use of a wetsuit, but that was too small. And obviously I had some difficulty trying to put on the dive boots and fins. There was no fanfare or framed certificate or overwhelming sense of achievement. That said, I wanted more. Accordingly, I have undertaken several try-dives since, all memorable. The last was an open water dive in a drysuit. 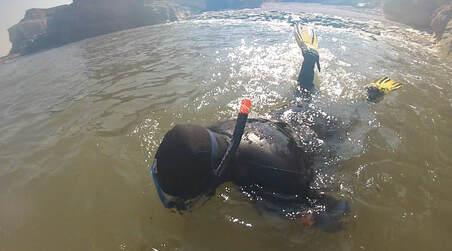 Some events define us, but when we dwell on that missed opportunity or unforeseen circumstance, life stops, and that urge to go back becomes almost an obsession. Existential regret was defined by Dr. M Lucas as, “A profound desire to change a past experience, in which one has failed to choose consciously, or has made a choice that did not follow one’s beliefs, values, or growth needs.”

My life is pockmarked with regrets. Some are debilitating, while others are just an annoyance. Some even relate to diving. One minor example of an existential regret was choosing to go snorkelling off the murky, sandy beach at Bridlington, on a sweltering summer's day in 1992, instead of Flamborough, with its clearer waters and aquatic life. Exploring Thornwick Bay or North Landing would definitely have been more rewarding. Instead of throwing in the towel, I might have gone back for more.

Another regret was in not avoiding an accident some twenty years earlier, an event that changed everything.

There was a time when I loved visiting my local swimming pool, first in Singapore, then in deepest Oxfordshire. It's what every kid enjoyed. I was an energetic young lad on the cusp of learning to swim, when it happened. I was six or thereabouts, so that would be around 1972, when I accidentally fell into someone's fish pond. We were visiting a friend of family. The exact details are irrelevant, or rather forgotten, but it destroyed my confidence, and put me off swimming through my formative years. While my contemporaries learned to swim, and reap the benefits, I literally sat on the sideline. I keep thinking, what if...

What if I hadn't fallen into that fish pond? Perhaps I would have become a BSAC Novice Diver by the early 1980s?!

So I was fearful of water, but also interested in scuba diving and snorkelling. Go figure! Now if only they had literally thrown me into the deep end, albeit with a mask and snorkel, I might have flourished. But these were the days when swimming teachers were of the opinion that “you’ll learn my way or not at all!” Even swimming googles were frowned upon. I remember once buying a cheap, toy mask, which definitely made a difference, only to have it confiscated by the PE teacher.

Thinking about it, my biggest regret in life has everything and nothing to do with diving, but has everything to do with not being able to drive. Not owning my own mode of transport has been somewhat restrictive and even debilitating. Strange that it took me decades to acknowledge this obvious disability, for lack of a better descriptive. The best dive clubs in Yorkshire are just a train ride away. The only problem is that their training sessions and social gatherings start after the last train departs for Hull. And while becoming a diver is important to me, it's not important enough for me to drop everything and move to Scarborough, or even return to Bridlington.

Yet, ask any diver to list their kit, and few would include the vehicle that transported them to some training pool or beach, places not usually serviced by public transport. Thing is, there are dive clubs and individual divers out there, who have graciously offered to help. But this has meant meeting them half way, usually at the aforementioned training pool or beach. And it's not just about diving. All those air displays I missed. That last flight of Concorde (26th November 2003). And on the hottest day of the year, just to escape the city, and head to the coast. 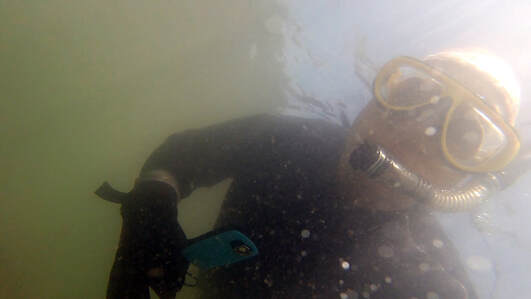 Another regret was selling my modest collection of military medals, acquired in my youth. They were sold to pay for a new wetsuit, albeit one unique to my size, that is to say a Large Extra Plus (LXP). Admittedly my weight has been an issue, and all previous options, namely Extra Large (XL), Extra Extra Large (XXL) and Extra Extra Extra Large (XXXL) had been exhausted. Needs must. Thankfully Beaver Sports (Huddersfield) offered a suit tailored especially for us fatties. Sadly, weeks after buying this new suit, an identical one appeared on eBay, albeit secondhand and for a fraction of the price. I still miss my medals.

Incidentally, my first wetsuit, bought in 1992 and used only once, was definitely a medium and cost £50. Sadly, the window of opportunity to wear this purchase was measured in months, after I went on a severe diet and started to ride a bike. My snorkelling adventure deemed a failure, never to be repeated, I piled on the pounds and moved to Hull. The wetsuit ended up in a skip.

How I got back into snorkelling!

There are numerous rules applied to diving and snorkelling. The most important one is NEVER DIVE ALONE. The reasons are obvious. Another rule or mantra is that you can't push diving onto your family and friends. You can push a pint into someone's hand, yes, or shove a pizza under someone's nose, yes, but diving and snorkelling is definitely, definitely not for everyone. Obviously you can politely ask around, again, hoping that someone will know someone, whose partner once bumped into a diver in the year dot, who might be persuaded to help, and accordingly my Facebook page is full of appeals for assistance, but so far I've been largely unsuccessful. But there was this one time...

While visiting Flamborough with some of artist friends in 2011, I repeated my wish to go snorkelling, but the lack of transport and a diving buddy had prevented me from molesting the fishes. Then it happened. One of those present said he'd like to have a go. He confided in me that he had a wetsuit, and a mask, snorkel and pair of fins. You could have knocked me over with a feather. The following year, on the 16th August 2012, we arrived at Thornwick Bay, Flamborough. We did our Mr Benn impersonation, changing into our wetsuits, and that was it. Okay, so being overweight (and the rest) did pose a problem, and I did need assistance, but at least it entertained the tourists, bemused at some lard-arse trying to squeeze into a tight rubber suit.

The biggest revelation is this...

Snorkelling is snorkelling. That's it!

The level of skill and stamina required is slightly less than that required to ride a bicycle. And the view? Being a lard-arse, sans weights or experience, one remained on the surface, where I saw very little. Sensing that a huge, blubbery killer whale was bearing down on them, the fish buggered off, leaving a lone, minuscule crab, who probably didn't get the memo, who scuttled away. In total we visited Flamborough five times over two years, until my friend threw in the beach towel and we called it a day. 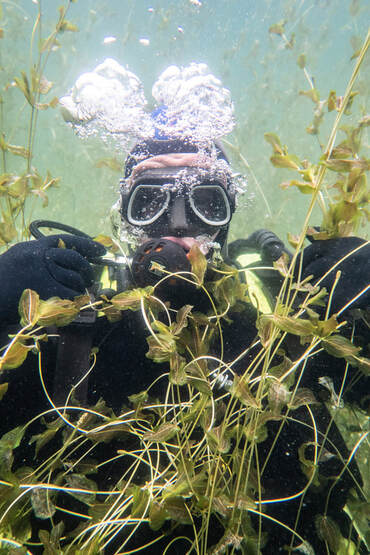 The last time I went snorkelling was...​

You see my Mum died, suddenly in January 2013. Grief counselling and a 200mg daily dose of Sertraline can only do so much, but being back in the water was a godsend. It was the first time in months that I was able to relax and feel at peace. Later, scuba diving in a couple of lakes proved equally beneficial. But I want more. But I'm not obsessed with diving enough to sell my belongings, or learn to drive or get a job I'm probably incapable of doing. Plus I have other obsessions to serve.

​The Impossibility of the Mundane

As someone who spent twenty plus years trying to save a former aerodrome from the bulldozer, the one thing that strikes me about being a wannabe diver is that it's absolutely nothing in comparison. It's certainly not rocket science. Yes, I've never had the funds to take up the sport proper, or the wheels to get me from training pool to dive site, but compared to the big ticket items that occupy my life, you'd think pratting about in neoprene would be easy. And that's the rub. Life becomes unbearable, not when we can't attain the impossible, but when the simplest of tasks appear to be beyond us. We all get angry when we can't achieve the mundane, because the mundane shouldn't defeat us, but damn that jar lid that refuses to budge...