“Thinking in Crayon” or rather my definition, is akin to a child creating a new invention (sometimes literally in Crayon), both grandiose and beyond the realms of fantasy. Thinking in Crayon is about designing or simply proposing something that you know probably won’t see the light of day, but it’s fun and keeps you occupied. Plus you get to invent some really cool sounding Three Letter Acronyms (TLAs) to confuse everyone with. An example of “Thinking in Crayon”...

Imagine if SpaceX were to repurpose its new Super Falcon Heavy and Starship technology, which is currently under development, to create a spacecraft capable of sending a team of  seven astronauts to Jupiter? Imagine a substantial spacecraft that could be assembled in low earth orbit, using just two redesigned second-stage Starship rockets. Imagine a spacecraft designed to provide its occupants with artificial gravity, needed for a mission lasting years. It’s kinda doable... 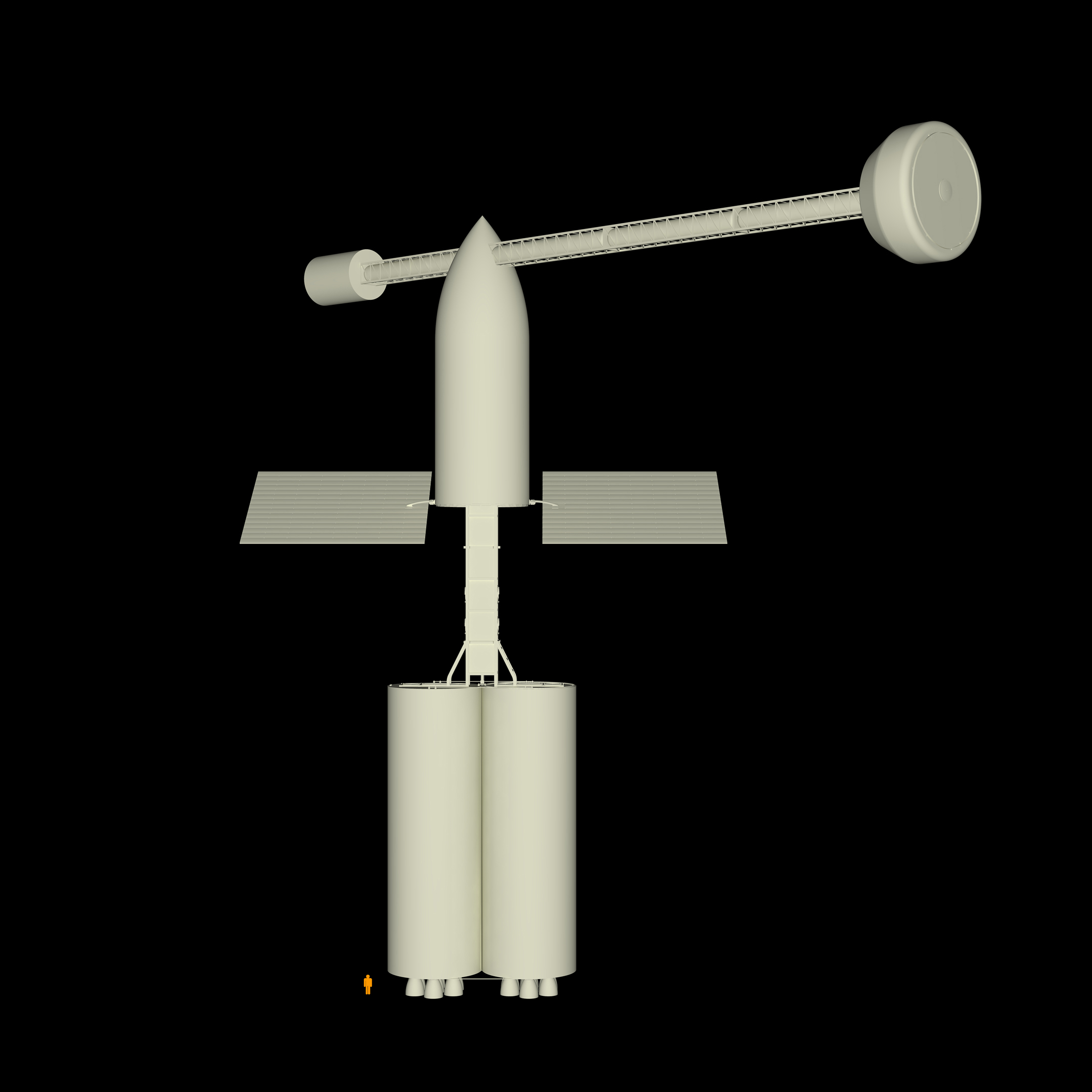 The Starship Endurance is approximatey 240ft tall (graphic design and concept copyright © Phillip Rhodes 2019)
We know that the 2018 design for the renamed BFR second stage (now known as the BFS or Big Falcon Spaceship or Starship or…) weighs 85 metric tons empty, and is capable of lifting 100 or 150 metric tons of cargo into space. It is 180ft long and 30ft in diameter. The 2019 rendition of this spacecraft retains most of these measurements. My proposed long-endurance spacecraft consists of two BFSs assembled in low earth orbit – bolted together side-by-side, and would subsequently weigh 370 tons, including provisions (but not fuel). It would be 60ft wide and approximately 240ft long. Unlike the BFS, this proposed craft would remain in space, even after being decommissioned. ​ 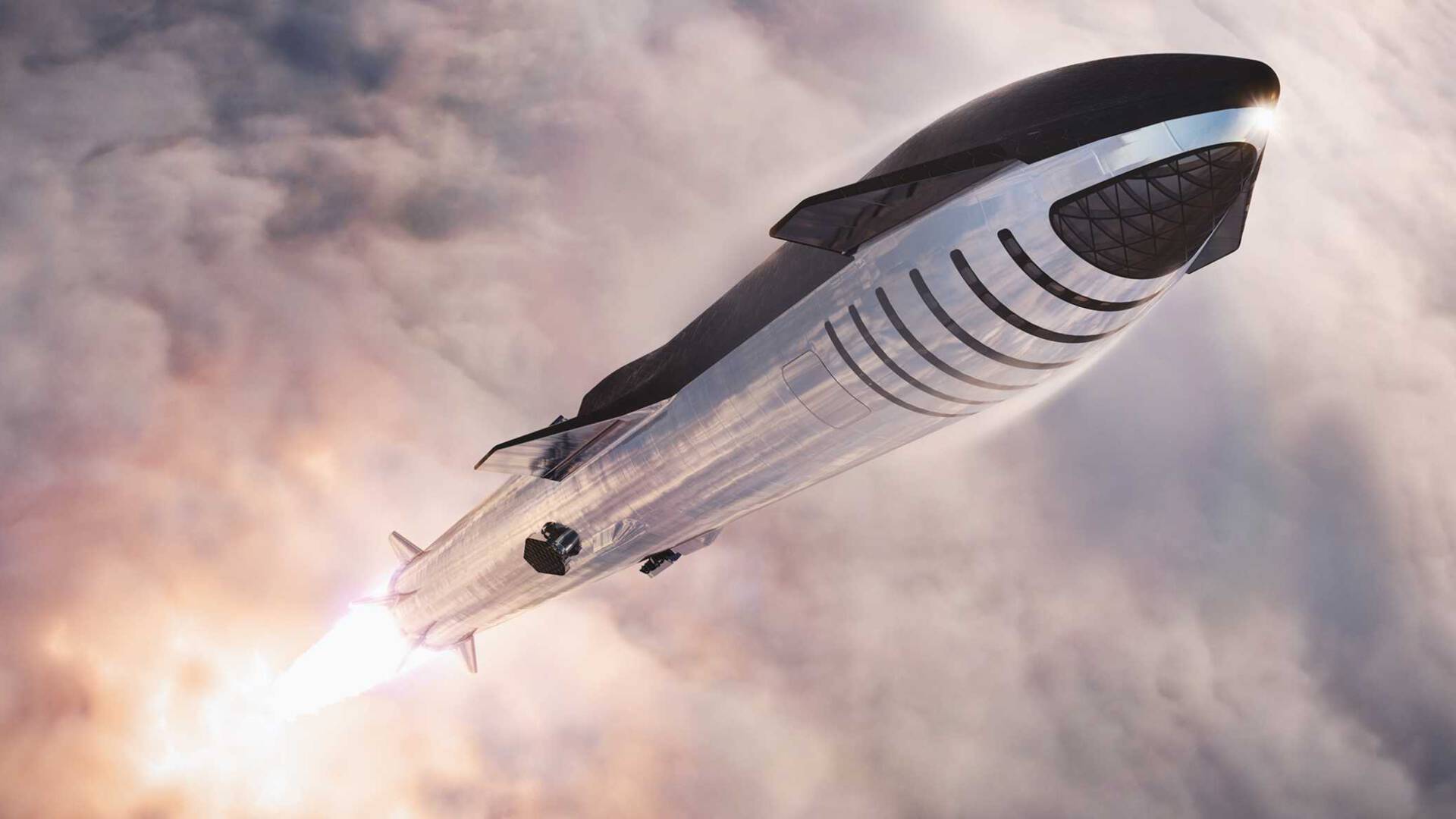 SpaceX Super Heavy (first stage) and Starship (upper stage), which was the inspiration for the Starship Endurance. Picture Copyright: SpaceX
My design utilises two BFR/BFS rockets. Each separate craft (Component A & Component B) would feature identical second stage Raptor engines and fuel tanks. Designed to permanently remain in space, there are various features on the proposed BFS spinoff that can be omitted, thus saving weight. These include the fins, rocket motor shroud and heat shield. In order to create artificial gravity in space - needed to support the crew on a lengthy mission - you need to spin the accommodation part of the structure. The centrifugal force creates artificial gravity. 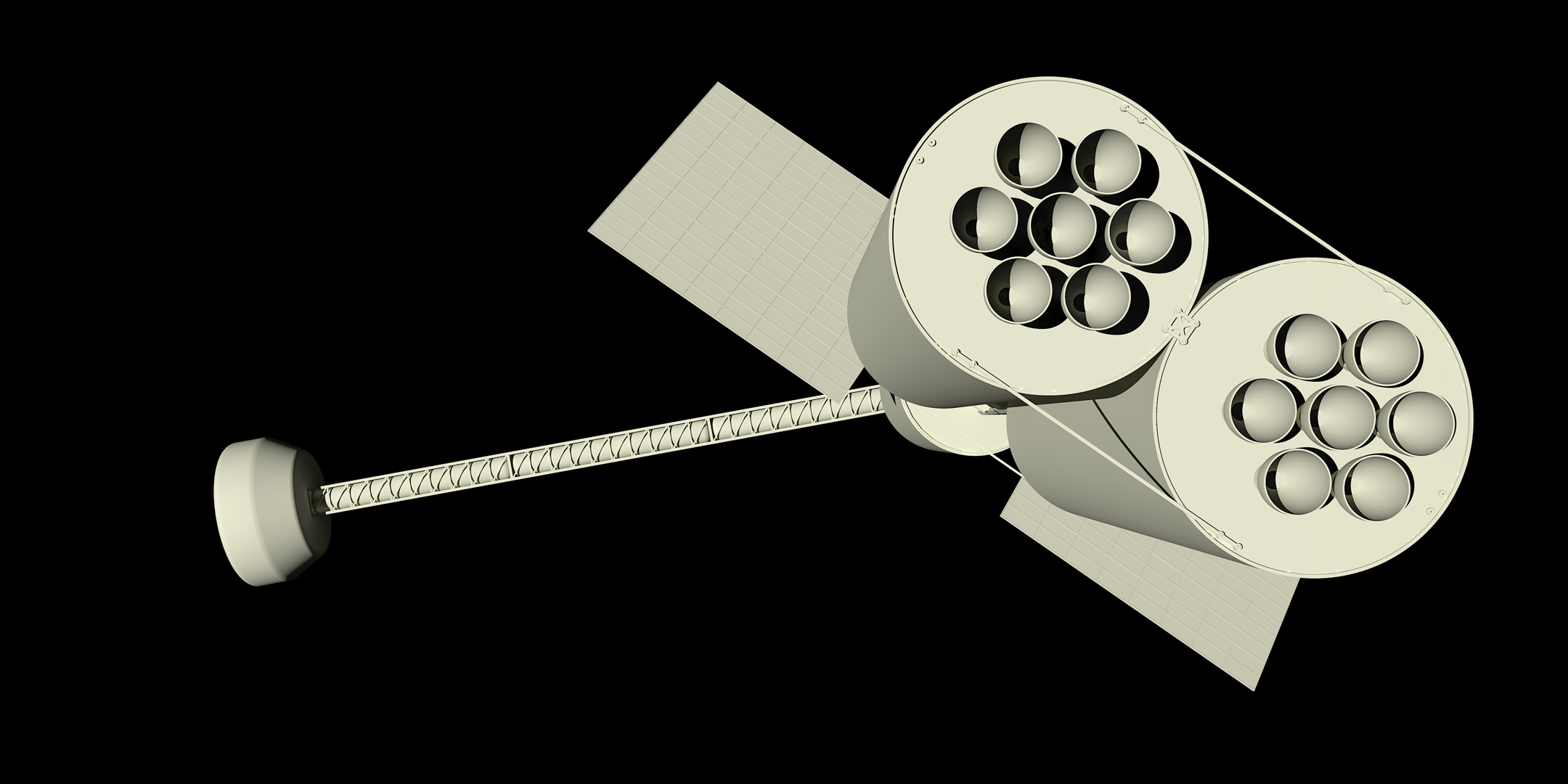 This concept features the same number of engines as the now defunct BFR. (graphic design and concept copyright © Phillip Rhodes 2019)
Forming the streamlined nose section of one of the BFS rockets, the Rotating Accommodation Module (RAM), would be 36ft in diameter, slightly wider than the rocket stack. The RAM will feature two levels, and enough space (roughly 1600 square feet) for seven Individual Living Quarters (roughly 58 square feet per person), Bathrooms, Mess Hall, Bridge / Mission Control, Sick Quarters and a separate Rest Room. The RAM would be attached to the main body or Central Core of the spacecraft by a 150ft long arm that would rotate roughly four revolutions per minute (RPM).  There would also be ample space for various equipment lockers and life support systems. The RAM would also feature a secondary airlock for emergencies, if the access arm became compromised.

The RAM consists of three sections of equal length. To reduce weight, this arm would feature both a lightweight girder frame (capable of carrying approximately 80 metric tons) and a flexible access tunnel. Think inflatable space habitat, with an airlock at each end. 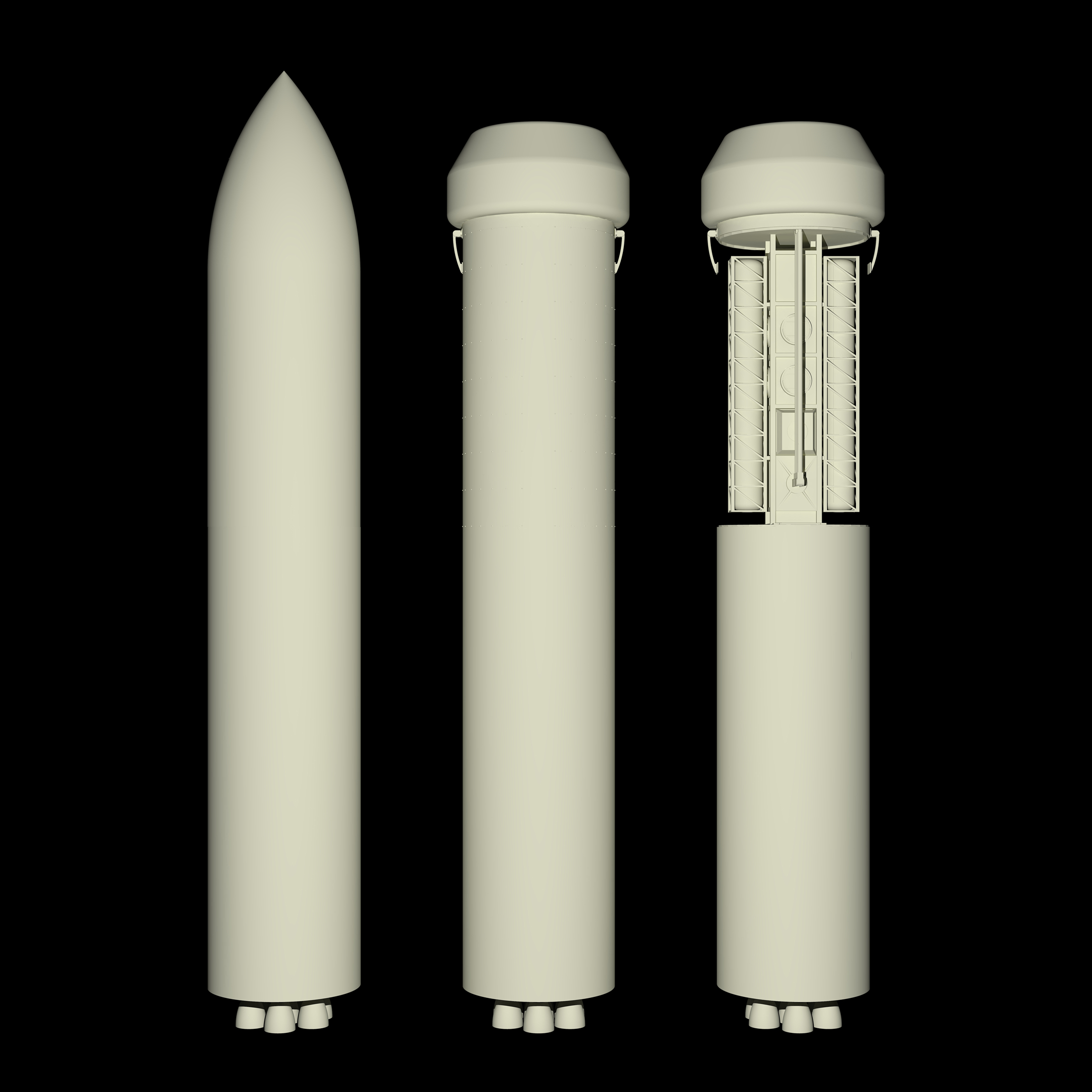 Starship Endurance in launch configuration. Component A features the Streamlined Central Core (SCC), while Component B features the Docking Mid Section (DMS) and the Rotating Accommodation Module (RAM). The nose fairing on Component B has been omitted. (graphic design and concept copyright © Phillip Rhodes 2019)
Most of the stores and life support systems would be housed in the Streamlined Central Core (SCC). To counteract the torque effect, the SCC would also feature a sizeable Reaction or Momentum Wheel (giant flywheel). The SCC would also feature a number of individual sealed storage compartments (over seven floors), a primary airlock, and solar storm shelter, not to mention several viewing windows. In the illustrations provided, I’ve added a counterweight – 50ft in length and holding the storm shelter.

The two rocket boosters and SCC are separated by the Docking Mid Section (DMS), a space frame structure, onto which would be attached the primary air lock, an extremely useful robotic arm, and attachment points for various landers, probes and Dragon II crew capsules.

The robotic arm would not be too dissimilar to the Shuttle Remote Manipulator System (SRMS), or the Mobile Servicing System (MSS), as fitted to the International Space Station (ISS). The only difference being its size and payload carrying capability. Initially, it would be used to assemble the craft in low earth orbit, and to capture and manoeuvre docking craft. 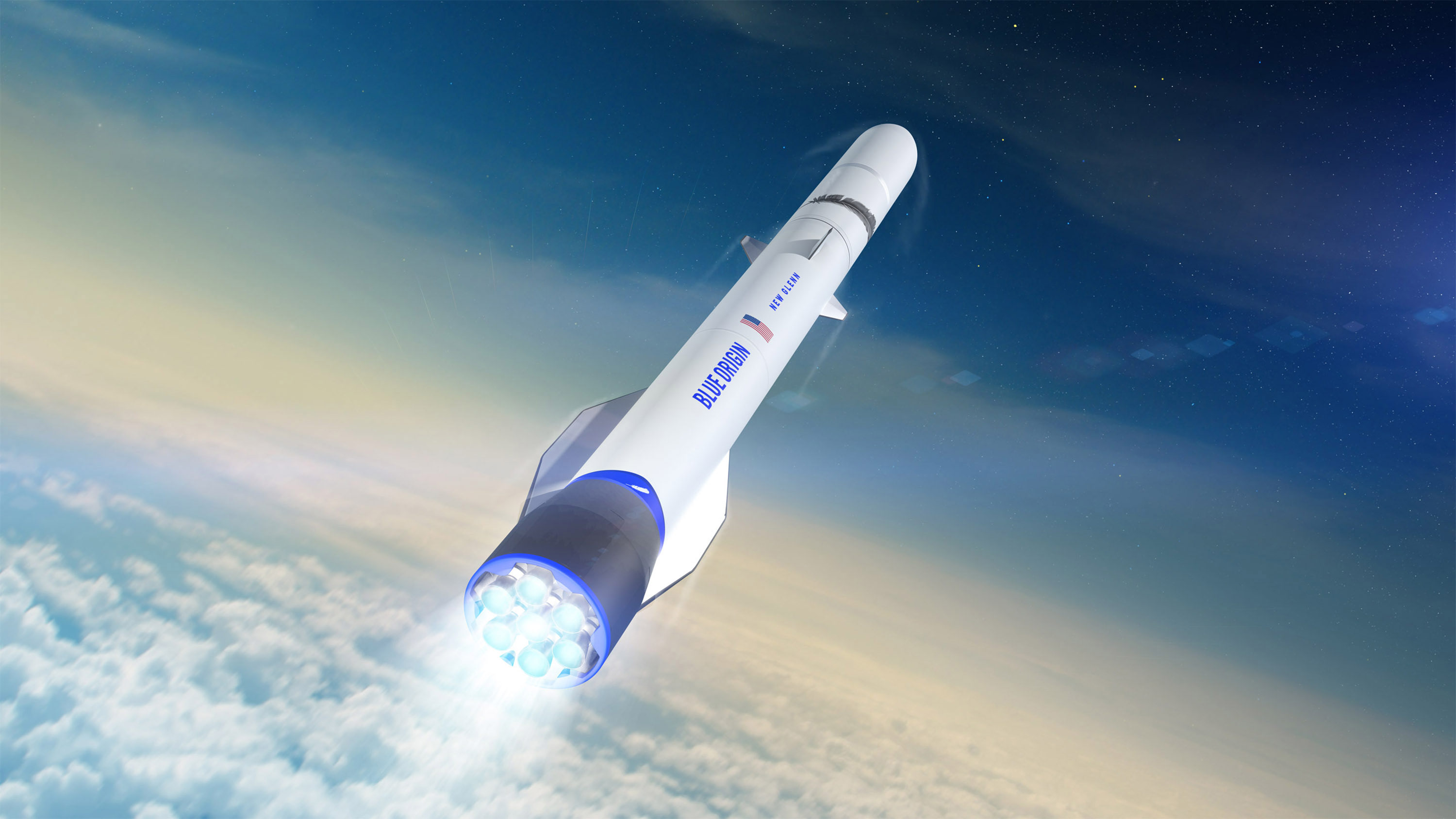 New Glenn by Blue Origin could form the basis of a smaller Starship Endurance, suitable for missions to Mars. Picture Copyright: Blue Origin
With the highly anticipated New Glenn rocket currently in development, my concept Voyager could work, if downsized to fit the dimensions (23ft width) and capabilities (45,000kg payload to LEO) of the new Blue Origin heavy lift vehicle. That said, it would probably result in a spacecraft too small for a lengthy mission to Jupiter.  However, Mars would be an obvious choice, which brings us to mission profile. Before Neil Armstrong and Apollo 11, several of his fellow astronauts, managed to orbit the moon. Is Mars too far to undertake a few orbits of Mars without landing on the Martian planet? That said, the experience and knowledge gained from a deep space and lengthy mission would be invaluable. With a smaller Voyager craft, expect a smaller crew and flight duration, but it would be doable. Just another suggestion!

Blue Moon landing craft as designed by Blue Origin. Could it be adapted to land on the Moons of Jupiter? Picture Copyright: Blue Origin
Incidentally, while the aforementioned “Blue Origin Voyager” would be too small to reach Jupiter, the company’s newly proposed “Blue Moon” lander could easily be deployed to the four Galilean moons, namely Io, Europa, Ganymede, and Callisto. These feature moon like characteristics: 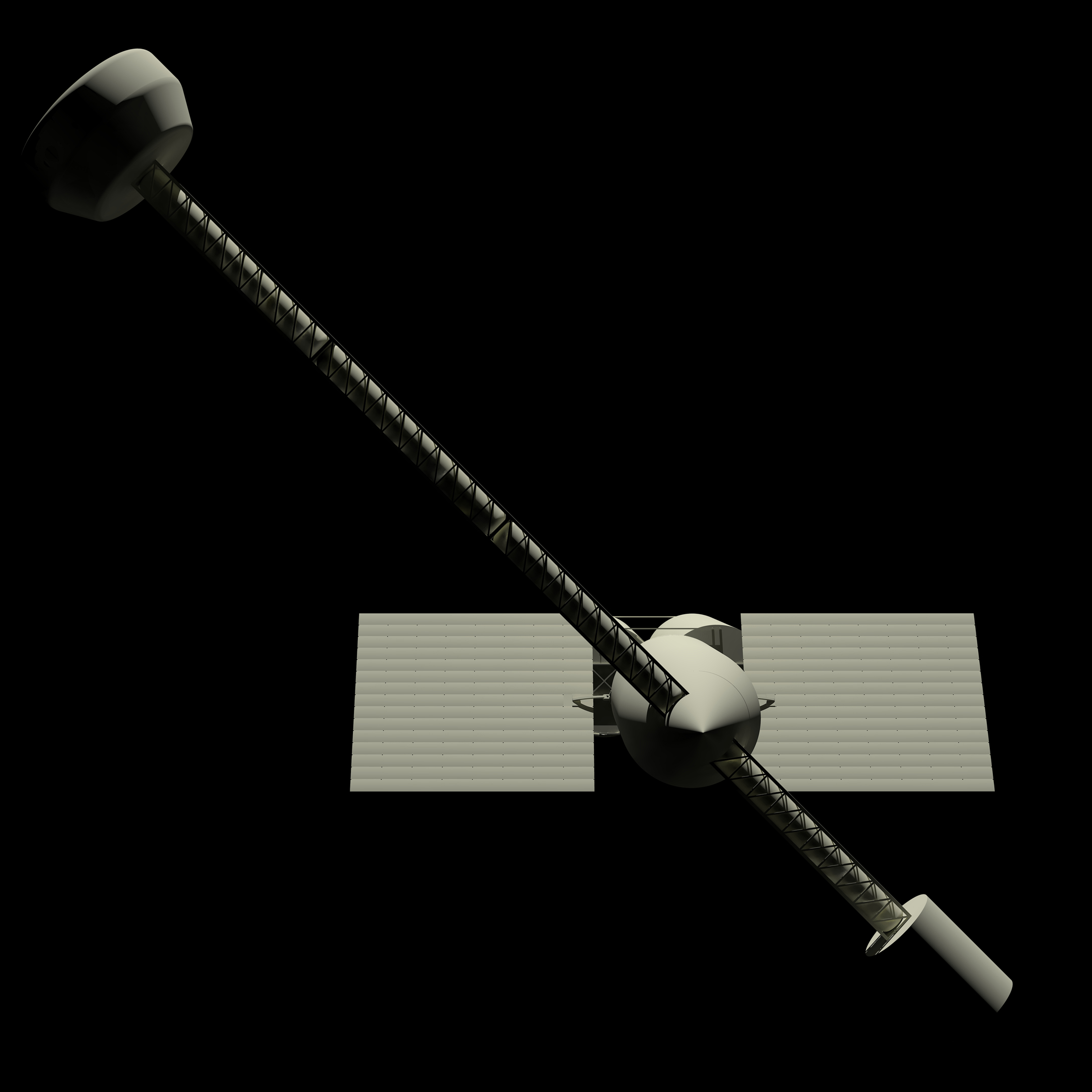 Seven astronauts would live in the Rotating Accommodation Module (RAM) attached to the end of a 150ft arm. Each would be provided with his or her own living quarters. (graphic design and concept copyright © Phillip Rhodes 2019)
Footnote:  This concept was created, not in Crayon, but in SketchUp, then rendered using Kerkythea. This project should have taken just a few weeks to complete, but alas my ageing PC couldn’t handle the large file sizes and complex geometry, but I persevered. A simple “cut ‘n’ paste” of a sub-assembly took hours, but I still persevered.

​Now I’m not an aerospace engineer, and many an expert will delight in picking apart my work, and there are numerous issues or omissions that many will pinpoint. That said, it's just an idea. Obviously, there are numerous unanswered questions: is it possible to reach Jupiter and its moons, and return home safely within a reasonable amount of time? It took five years for NASA’s Juno space probe to attain an orbit around Jupiter. The journey can be achieved in around two years, but that would result in a speedy flyby. How much fuel would you require to decelerate? How do you change orbit from Jupiter to one or more of its moons? And if you could only land on one or two of Jupiter’s moons, which would you choose?

Another issue is fuel. Liquid methane and oxygen are difficult to store for an extended period measured in years. These liquids boil - gradually turning to gas. However, it's reasonable to assume that the technology exists to return these gases back into a liquid. The Starship Endurance is fitted with large solar panels, which should provide sufficient energy to power such plant.

Getting to Jupiter is easy. Getting there and back within five years? Can you live in a tin can for that length of time without running out of provisions, or without killing your fellow crew mates? Is a crew of seven too few or too many? Each additional astronaut adds several metric tons of additional provisions.  How many Landing Modules (LM) would be required? Obviously this proposal is set in crayon, not concrete. Feedback is appreciated. And if anyone from SpaceX or Blue Origin is interested...

Blue Origin Mars Shuttle concept Deep Blue CLICK HERE
If you would like to help me be more creative (and pay the bills), please buy my ebook, or you can donate towards future projects (use the PayPal button below)! Your help is very much appreciated.  "The Lost Diaries of John Smith" is my enthralling science-fiction,  post-apocalyptic eBook, and is available exclusively from Amazon Kindle:

The film and television rights to this book are available. ​