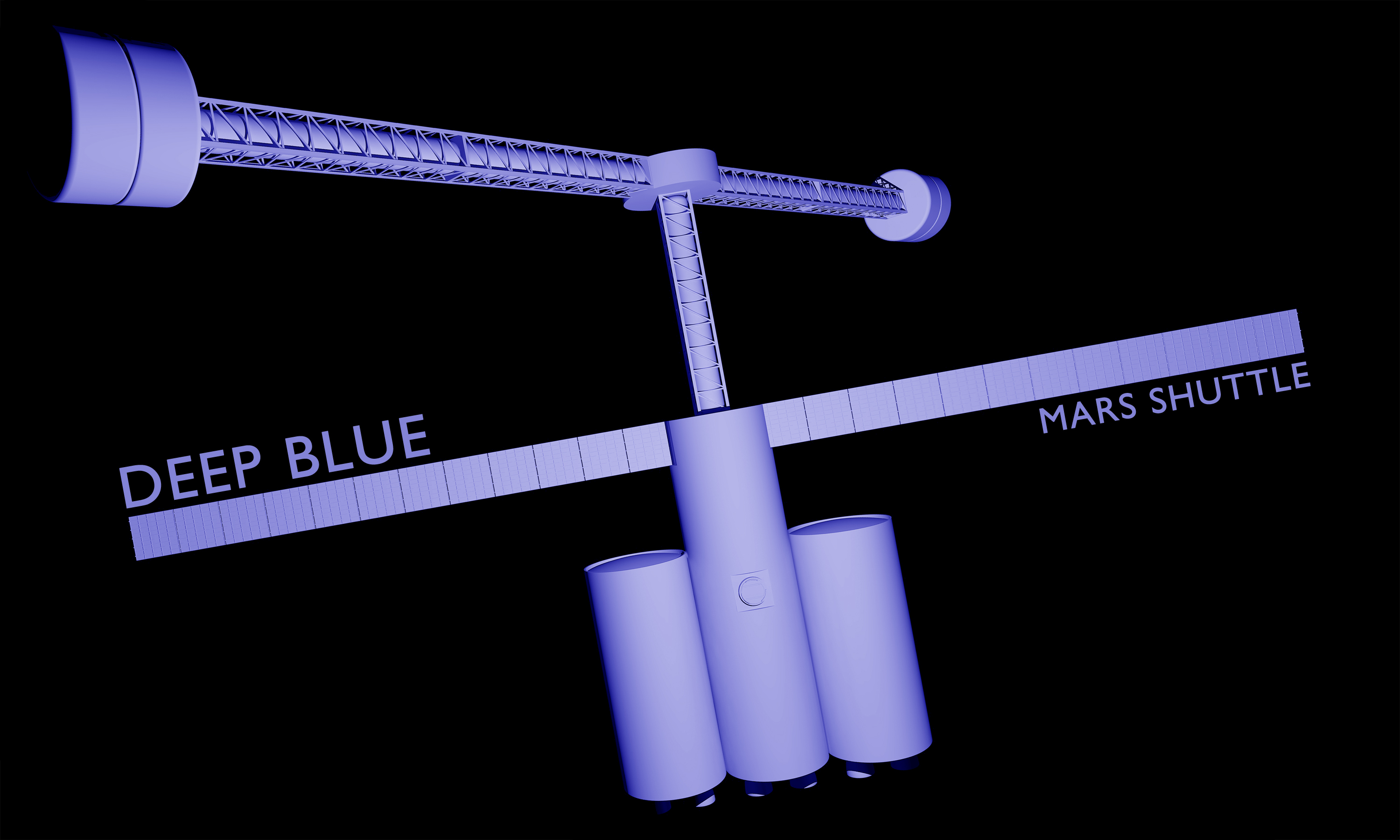 Deep Blue is a Mars Mission capable spacecraft, made up of three, second stage New Glenn rockets, each carrying numerous components. Smaller than the SpaceX inspired Starship Endurance, this vehicle features two Rotating Accommodation Modules (RAM).  Each RAM is bolted to the end of a 100ft (2 x 50ft lengths) long access arm. Rotating at five revolutions per minute, and attaining 80% of earth’s gravity, this is more than suitable for a long endurance mission to Mars. 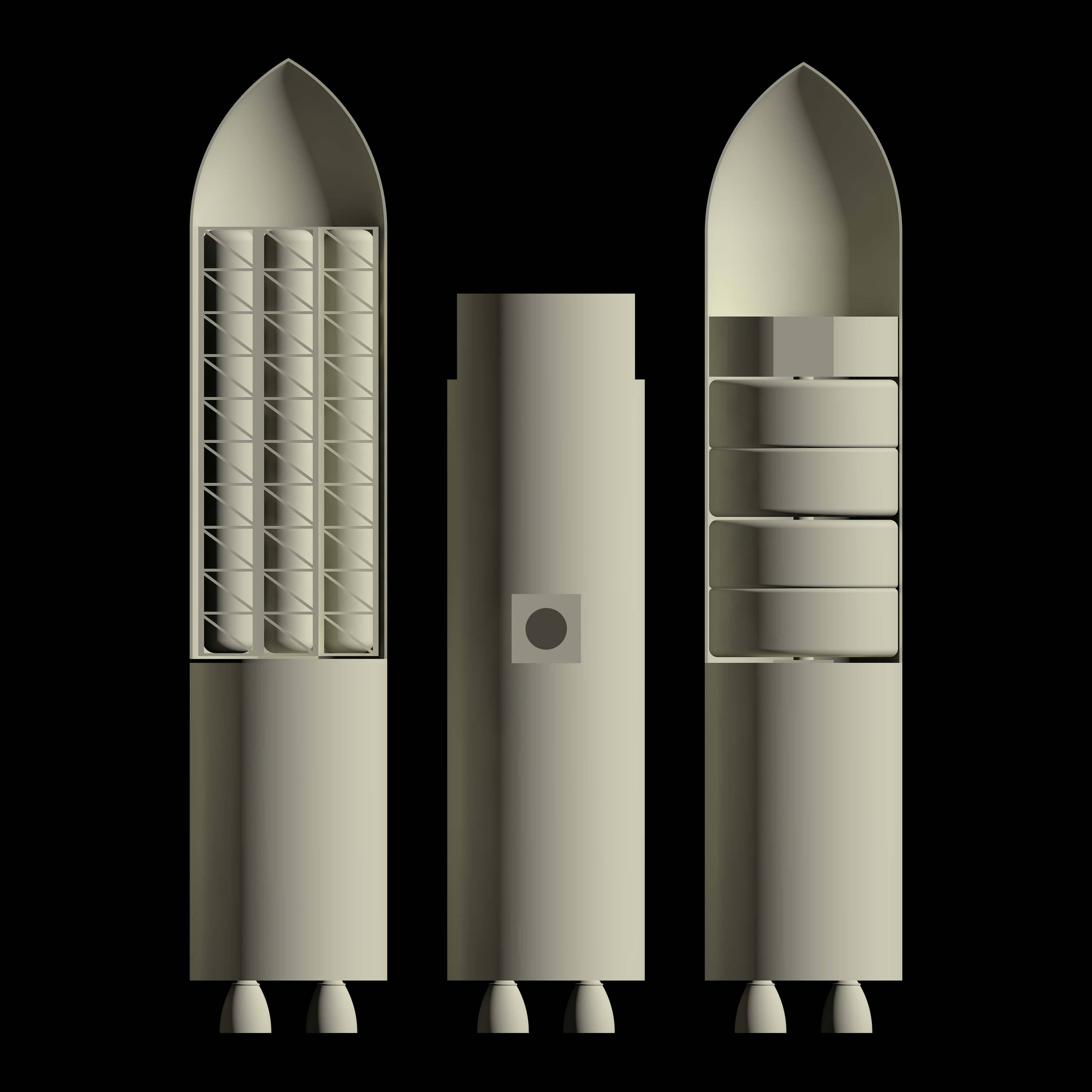 Deep Blue in launch configuration - three separate New Glenn second stage rockets. The nose fairing on the middle rocket has been omitted. (graphic design and concept copyright © Phillip Rhodes 2019)
​Each RAM features two floors, each 22ft in diameter, resulting in a total of 1520 square feet of habitable living space. Being smaller than the Starship Endurance, Deep Blue features just two airlocks, and a smaller robotic arm (not featured). As with the SpaceX Starship, once in orbit and assembled, the first task will be to refuel the craft, using ship-to-ship transfer. Another option, if it is deemed acceptable to expend a second stage rocket, might it be more convenient to launch a dedicated prefilled or pre-fuelled booster? ​ A second stage New Glenn rocket (with enlarged fuel and oxidiser tanks) can carry 45 metric tons of propellant into LEO. Simply attached a couple onto Deep Blue, and you’re good to go. That said, surely it would be cheaper to launch a couple of second stage Falcon Heavy rockets (illustrated)? 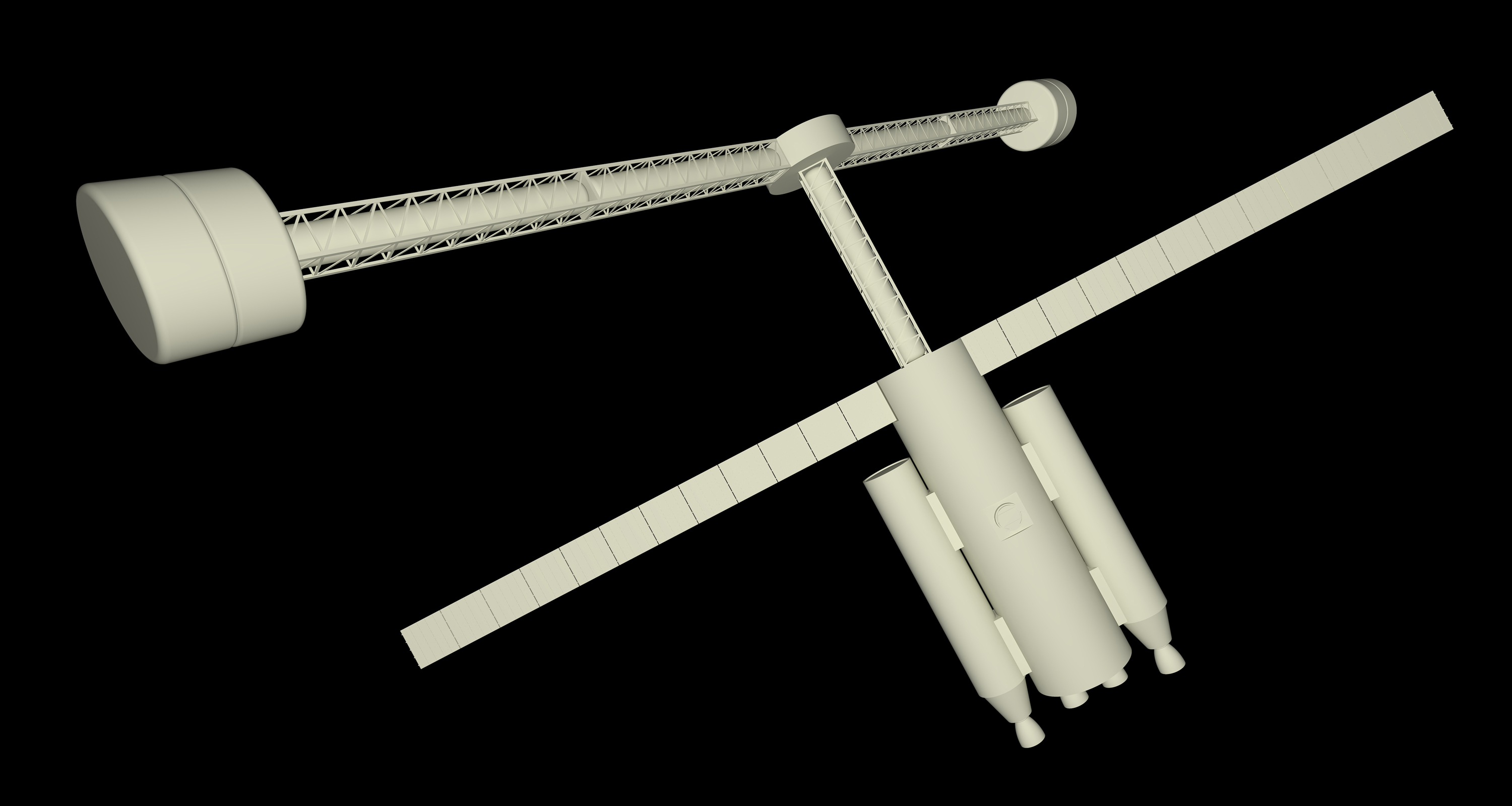 These concepts are just that. They add to countless other designs drawn up by other enthusiasts. The science is probably all wrong, but it points to something new, namely the social inclusion within rocketry and space exploration. Enthusiasts and armchair aerospace designers now have a voice and an audience, but is that enough, and to what aim? Personally, this project was just to get something out of my head, and to learn new skills. Then it became the means to add content to my portfolio, and to promote my book and forbidden artwork.

A few more observations. These designs are largely based on assumptions. Is it possible to bolt together something this complex in low earth orbit, within the confines of just two or three launches? Although it’s impractical to design a craft that can “auto-assemble” at the touch of a button, so is manhandling large components in space, while manually trying to affix Component A to Component B with six inch bolts and a spanner.

But do I continue, or do I just promote my book through other means and outlets? This website and my work kinda portray or hint at my social and economic circumstances. I need to make money. See below…
If you would like to help me be more creative (and pay the bills), please buy my ebook, or you can donate towards future projects (use the PayPal button below)! Your help is very much appreciated.  "The Lost Diaries of John Smith" is my enthralling science-fiction,  post-apocalyptic eBook, and is available exclusively from Amazon Kindle:

The film and television rights to this book are available. ​